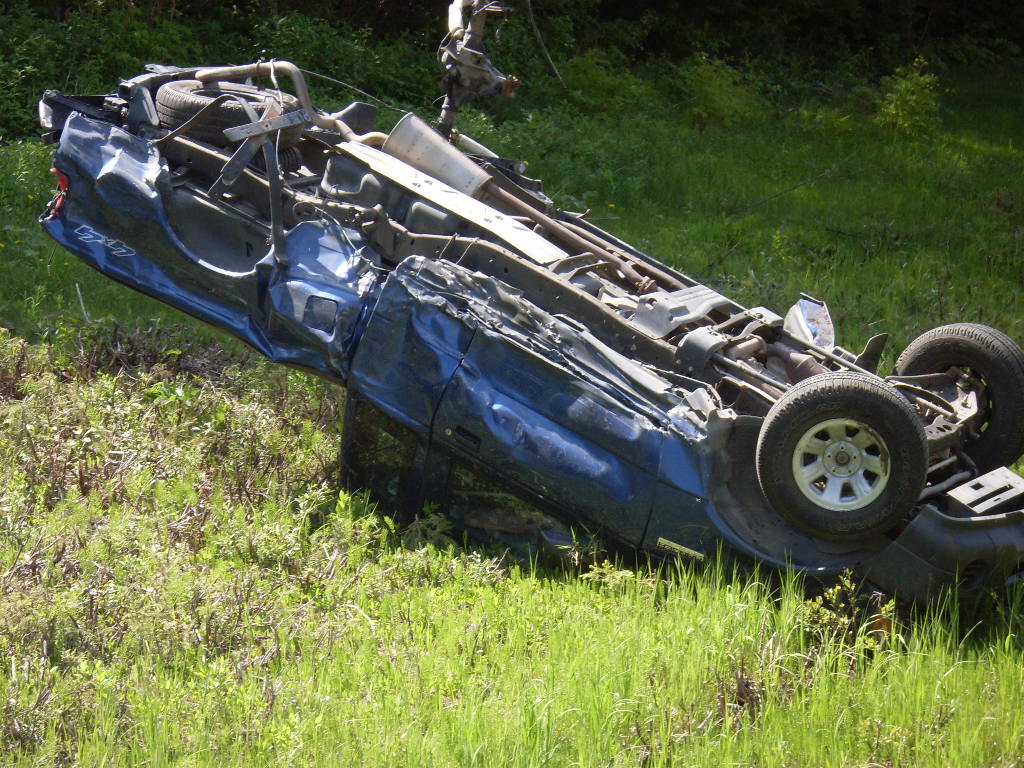 26 February In The News by abcweblink

Prince George, B.C. – By all eyewitness accounts a motorist is very fortunate to have escaped serious injury in a rollover accident Saturday afternoon near Ness Lake.

At approximately 4:15pm police, ambulance and Fort George Highway Rescue crews were dispatched to a single-vehicle rollover on Ness Lake Road north. Initially it was thought a person was trapped in the vehicle but that was not the case and the Highway Rescue unit was called back to town.

Eyewitness Matthew Heaton was driving his Toyota Tacoma extended cab pick-up in one direction and heading into a “wicked” dip and bend in the road as a small import compact car approached. Heaton says “She started losing control, went into the gravel and her car went completely sideways and then got herself straightened around and  almost T-boned me. She ended up spinning all the way around, hit the gravel and flipped upside down into the ditch.”

Heaton was amazed the woman wasn’t more seriously hurt. “She’s got three small cuts on her. One on her leg, one on a finger, um that’s about it. And she crawled out of the car on her own. It was totally on its roof, the windshield was completely crushed in.”

Heaton was also surprised at the age of the driver and lone occupant of the car. “When she came down me and my buddy thought it was some teenager trying to drift the corner, but it was some older lady, probably between 50 and 60.”   And he says there was no doubt in his mind the car was speeding as it careened out of control toward him. “I mean I’m 19 and I drive stupid sometimes, but that freaked me out, that scared me.”

Prince George resident Harold Little and two companions were travelling behind the pick-up. He says it appears the woman “wasn’t wearing a seatbelt so she wound up on the roof inside. Cuts and bruises is all she got. The guys in the pick-up saw it all in their rear-view mirror as she went whistling by.” He says police had the road blocked off for a time while they investigated. An ambulance crew tended to the female driver’s minor injuries.

It was the second known rollover accident in the Prince George area since the start of the holiday weekend Friday afternoon.   Shortly after 5pm Friday a vehicle rolled off Highway 97 south between Bellows Road and the Red Rock Volunteer Fire Hall. As yet police have released no information about that incident.